OmegaLand is an integrated environment for dynamic simulation that enables the creation of virtual chemical plants, petrochemical plants, refineries, and other types of production facilities. This facilitates operator training, the analysis and examination of processes, the design and verification of control systems, education about chemical processes, operation assistance, and operation optimization.

Further, high fidelity plant models in OTS are able to be leveraged to other purposes throughout the plant lifecycle.

High Fidelity Dynamic Simulator
OmegaLand OTS includes a high fidelity and rigorous dynamic simulator called as Visual Modeler. Visual Modeler accurately reproduces actual plant behaviors because it is designed with the complete heat balance, mass balance and pressure flow balance based on the laws of conservation of mass and energy. It includes the DIPPR (Design Institute for Physical Properties) database that contains 1,600 pure components, and a wide variety of calculation methods of the thermodynamics.

Identical DCS and SIS Operational Environments
It is essential for the high fidelity OTS to utilize identical DCS and SIS operational environments of actual plants. OmegaLand OTS is able perfectly to link with CENTUM and ProSafe-RS, Yokogawa DCS and SIS, one of the most famous systems worldwide. This leads DCS operators to feel like that they are in front of their system, and working on their plant.

Further Applications Over the Plant Lifecycle
OmegaLand OTS is applicable not only for the operator trainings but also for other purposes over the plant lifecycle with leveraging plant models developed in OTS. 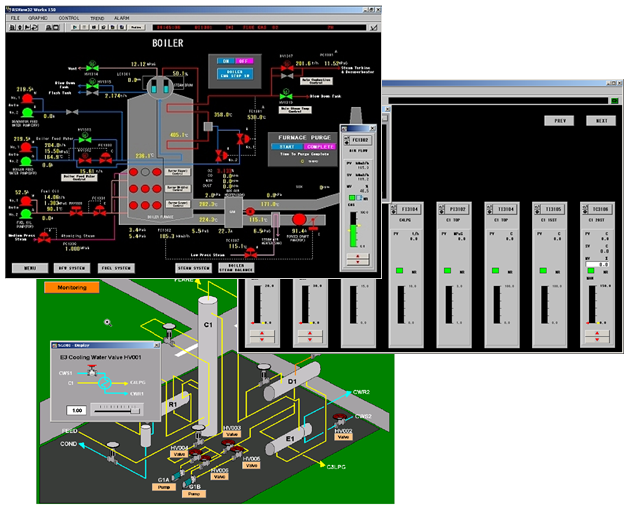 Further Applications Over the Plant Lifecycle
OmegaLand OTS is applicable not only for the operator training but also for other purposes over the plant lifecycle with leveraging plant models developed in OTS, leading to optimization.

MIRROR PLANT, which is based on the OmegaLand technology, has been developed and works in synchronization with the plant control system and constantly and periodically updates the process models. This means: On a virtual plant configured in a dynamic simulator, it is possible to perform many kinds of examinations and verification of problems, which would be impossible at a real plant in operation due to the concerns for safety and external disturbance. It is also possible to predict problems which might occur in a plant that will be built in the future.

The following options are available in the simulation environment, emulating real-life situations:

The OmegaLand interface for data exchange has been exported; therefore, you can get simulation data or put values only by coding a brief macro (VBA) in Excel. It is also easy to get simulation results in real-time to process them.

The educational simulator is a dynamic simulator applied to teaching chemical engineering. Students will have opportunities to understand the principles of today's complicated plants and train themselves to master unit operations through simulations on a virtual plant. Such experiences would be impossible to obtain from desk study. Eventually, they will be able to acquire the knowledge and skills necessary for analyzing and handling a variety of situations efficiently.

Objectives of Educational Seminar - Taking the initiative in using simulators, the students can learn and expand skills and knowledge quickly, and will achieve the following objectives.

The educational simulator is usually configured on the VMviewer.

In recent years, great technological progress has been made with plant operation and control. In addition to the control system of the conventional DCS, more advanced plant operation system connected with DCS host system has been demanded such as advanced control packages including multivariable model prediction control and neural prediction control, and operation assistant packages for automatic operation of startup, shutdown, and changing grades.
Prior to actual application of these control assistant packages to a real plant, preparatory verification and tuning are available by connecting them to the virtual plant, OmegaLand.
Since a dynamic simulation allows verification of the influence by the control logic and operation of these packages, the control assistant simulator will be particularly useful for changing the control logic accompanied with the process improvement and for preparing complicated operation procedures to improve operation efficiency.

In addition to the basic functions of a dynamic simulator such as execution control (run and freeze), snapshot and stepback, and changing time scales, the operator training functions are required. They are, for example, functions for execution of malfunctions, automatic operation, simulation of field operation, logging and replay, and evaluation of trainee's performance

In addition to the execution control which runs and freezes the operation of the whole system including the direct connect DCS, there are various functions: the snapshot function which temporarily stores a condition during the training, the stepback function to recover the stored condition to restart the training, and the time-scale-changing function which accelerates or delays the execution rate by two or four times.

Training starts from a steady-state of a plant that has been setup in advance. Such a condition can be kept beforehand in a file as an initial condition.

These functions are used to cause an abnormal state or an equipment failure deliberately. Operators are trained to be able to cope with such situations. To activate malfunctions, there are two methods. One of them is to select from the list of the execution control panel. Another is to prepare a panel dedicated to malfunctions on a graphic window and instruct the execution by a button.

The automatic operation module is useful for carrying out training based on a series of procedures having a story (a scenario function) or the procedures that take place intentionally excluding an operator's part (a 'karaoke' function). This automatic operation function is utilized even for the execution of malfunctions if plural operations are accompanied; variables are handled over a long period of time; or processing is selected depending on conditions.

The functions to reproduce the performance after a training session as it has taken place. This reproduction is used for the instructor to review the performance with the trainee and give guidance.

It is possible to store training performance and events in a log file to keep them as a record or to evaluate the performance. Events recorded with time stamp can be used for replay.

This function outputs logged data to Excel for the instructor to count the number of DCS operations and alarms and also makes graphs of trend data to evaluate trainee's performance.

For the DCS direct connect type, DCS must be connected. For the operator training system, however, it must be noted that FCS simulator takes the part of FCS (Field Control Station) of DCS. The FCS simulator does not require the hardware that is the same model used for actual plant control, but its function is the same as the actual FCS.

In recent years in the chemical and petrochemical industries, the contexts of fewer start-up and shut-down operations and the changes of cohorts of plant operators have made it difficult to satisfy requirements for safe plant operations, including responding to problems in equipment caused by the aging of plants, and coping with malfunctions.

A dynamic simulator is a software tool for building a virtual plant in a computer by modeling an existing plant or a plant to be built.