The themes of the workshop are related to light, electricity, radio waves, and other topics related to the basic technologies that support Yokogawa. Employee volunteers act as instructors and provide personal instruction during hands-on construction projects. After the employee volunteers have explained the mechanisms of light or electricity according to the theme, the participating children begin the construction tasks, including soldering. Also, the employees provide an introduction to technology jobs. Drawing on the children's interest in technology, they teach the children the importance of thinking and making improvements. This interaction with children leads to the growth of the employees as well. 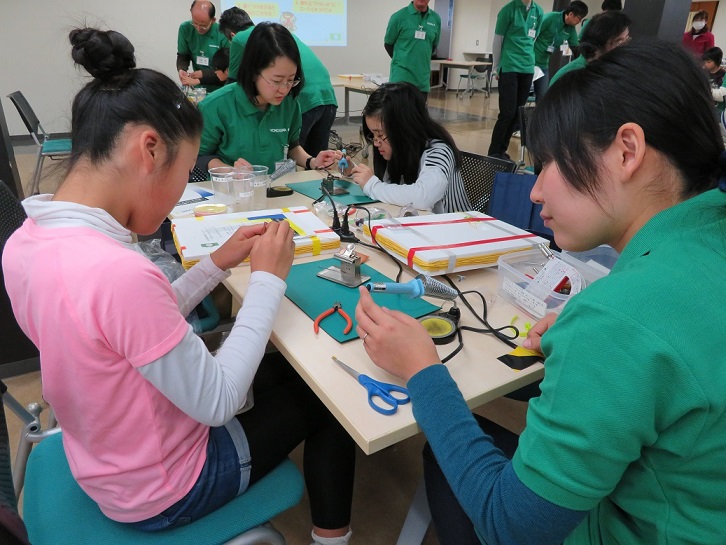 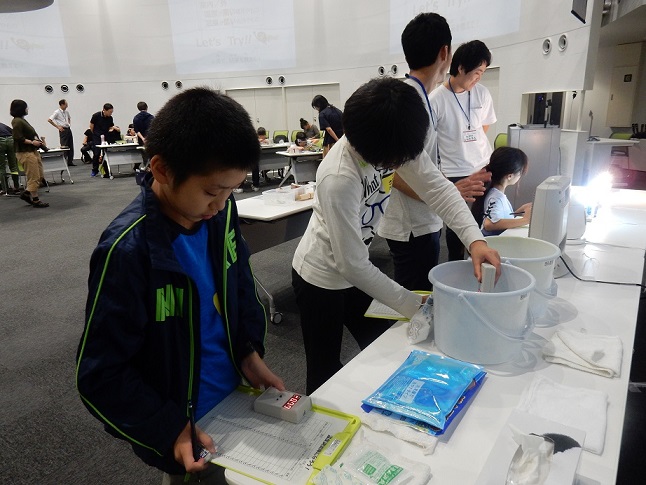 Each year Yokogawa participates in the "Musashino Science Festa," an annual event held by the city of Musashino. It's a comprehensive event for scientific experimentation in which elementary and junior high school teachers, businesses, volunteer organizations, etc., in the city set up booths to exhibit their experimentation. There were approximately 1,700 visitors to the event in 2017.

The theme of Yokogawa's booth was "Discovering the Secrets of Voice." Visitors to our booth observed what their voices looked like, using a hand-made microphone amplifier and oscilloscope. A Booth for making string telephones using paper cups and strings was set up for young children. They learned that their voice can be transmitted via string. The children seemed really interested as they watched the waveform change according to the loudness of their voices and the frequency, or pitch, of the sound. Also for the Yokogawa staff, who participated in the event as volunteer staff, it was a valuable experience to instruct the visitors how to observe their voices using the oscilloscope. Yokogawa has, since 2008, contributed to the "Sending School Bags across the Sea" campaign sponsored by Kuraray Co., Ltd. In fiscal 2017, too, we collected unneeded stationery and used school bags packed with the memories of the donating employees, and sent these overseas to support children's education in Afghanistan and Mongolia where literacy rates are notably low. The number of school bags donated by employees over the past 10 years has reached 567.