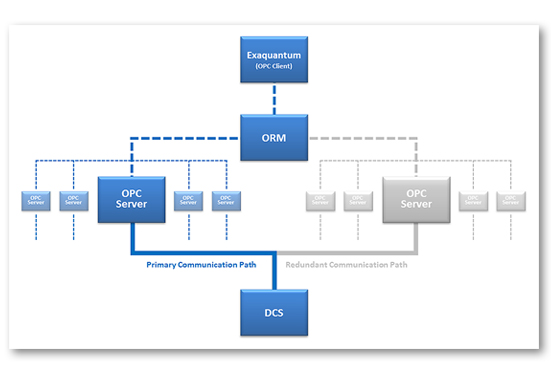 The Problem
When there is a requirement to collect OPC DA and OPC HDA process data from redundant OPC servers to minimize potential data loss, the following limitations exist:

The Solution
Exaquantum/ORM (hereafter known as ‘ORM’) is Yokogawa’s OPC Redundancy Management solution that allows one or more redundant pairs of OPC DA and HDA servers to be connected to a single Exaquantum server.

When the current Master OPC server becomes unavailable, ORM will switch to the Standby server to activate the groups and become the new Master server.

If the Exaquantum connection to both the Master and Standby OPC servers is lost then when the connection is re-established, ORM will attempt to use the previously designated Master OPC server.

After switchover, the Standby OPC server becomes the new Master OPC server and data is supplied from this server until communication is lost as defined in the following table:

ORM can support a maximum of 16 OPC connections (OPC pairs) but this number could potentially be increased depending on the Exaquantum server loading due to the amount of process data being received.

ORM reads data from the Master OPC Server, if it is available. If the Master server becomes unavailable while history catch-up or OPC Data Recovery is running, ORM attempts switchover to the Standby OPC server, which if successful, becomes the new Master for subsequent catch-up blocks.

For Exaopc OPC Server types (Exaopc-STN, Exaopc-XL and Exaopc-µXL), OPC HDA data is requested for the specific update rate of the item.

Please note that ORM does not include an OPC HDA Equalization Module as provided by Exaopc-RD to ensure that both OPC servers in a redundant pair have the same OPC HDA data available. This is a function of Exaopc-RD and not Exaquantum. For Exaopc, the Standby OPC server will not be storing HDA as its groups are not active.

The following Exaquantum features are supported by ORM subject to the OPC Gateway configuration and whether the underlying OPC Servers support them: