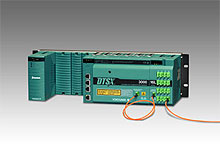 We adopt technology that the optical fiber cable itself functions as a temperature sensor.
Since it measures temperature distribution over a long distance and a wide range, partial temperature change is not overlooked. Therefore, it is effective not only in the plant but also in fields requiring temperature monitoring.