Yokogawa Electric Corporation announces that Yokogawa Saudi Arabia has been selected as the process control system supplier for the Rabigh Ⅱ project* in which Saudi Aramco and Sumitomo Chemical have decided to invest.

Yokogawa will supply its flagship products, the CENTUM® VP production control system and the ProSafe®-RS safety instrumented system for the Petrochemical Complex. This is an indication that Yokogawa's business partners acknowledge its success in the Rabigh I project and has full confidence in Yokogawa's capabilities. With phases I and II combined, this is the largest project for which Yokogawa has been selected in the Middle East.

Since the foundation of Yokogawa Saudi Arabia in 2006, Yokogawa has strengthened its engineering capabilities in the Kingdom through the course of several mega projects. Yokogawa's success in these projects has earned the customer's confidence in its local project execution capabilities, leading to the decision for the Rabigh Ⅱ project to be fully executed in Saudi Arabia, at the company facilities in Dhahran Techno-Valley. The execution of this project in the Kingdom follows Saudi Aramco and Sumitomo Chemical's guidance on the maximization of Saudi Arabian content. 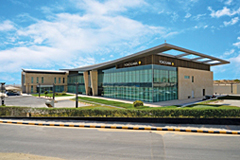 Yokogawa Electric Corporation, following through on its commitment to its customers in the Kingdom of Saudi Arabia, has doubled the size of its facilities in the Dhahran Techno-Valley. In addition to engineering and project execution capabilities, the new facility allows Yokogawa to manufacture specific elements of the control system and to strengthen the research and development activities.

* About Rabigh Ⅱ Project
The Rabigh Ⅱ Project, by expanding the ethane cracker and building a new aromatics complex, will use additional 30 million standard cubic feet per day of ethane and approximately 3 million tons per year of naphtha as feedstock to produce a variety of high value-added petrochemical products. Each plant will be brought on stream as it becomes available for operation, beginning the first half of 2016.