Yokogawa Electric Corporation announces that it will release an enhanced version of the STARDOM™ network-based control system on May 31.

This enhanced version includes new modules that enable the FCN autonomous controller to communicate directly with facilities and devices that use the PROFIBUS-DP and CANopen industrial communication protocols*. An IT security setting tool is also provided to assist in the configuration of the same security models employed by Yokogawa's CENTUM® VP integrated production control system. In addition, Microsoft Visual Studio® 2010 support has been added for the creation of graphics for the VDS SCADA control and monitoring software. 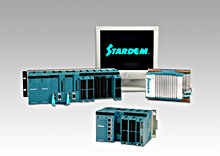 The STARDOM network-based control system consists of the FCN/FCJ autonomous controllers and VDS software. The system is used as a main controller for equipment in small- to medium-size manufacturing plants, facilities that are distributed over a wide area such as oil/gas wells, and wind power generation systems, which is a booming segment of the renewable energy market.

As applications grow more varied, users need to connect with devices such as programmable controllers (PLCs) and motor control centers (MCCs) from other vendors that use different communication protocols. There is thus a rising need for controllers that support a variety of communication protocols.
Also, as STARDOM is often operated and monitored as a DCS subsystem, its security measures must be equivalent to those used by the DCS to protect against cyber-attacks. And as for the Web-based HMI SCADA software, there is the need for a more general-purpose application development environment.

Takashi Nishijima, Director, Senior Vice President of the Industrial Automation Platform Business Headquarters, says, "With field digital technologies that make effective use of plant information through the digitization of communications between field devices and control systems, Yokogawa is helping its customers realize the VigilantPlant concept. This new version allows customers to implement digital communication with both PA and FA devices. Digital information can be used to integrate on-site device management and maintenance. Device diagnostics help improve availability at our customers' plants. This will truly realize asset maximization."

* PROFIBUS-DP and CANopen
PROFIBUS-DP and CANopen are open fieldbus communication protocols that have entered wide use around the world in industrial automation applications. PROFIBUS is used in a wide variety of industrial devices and conforms to IEC international standards, while CANopen conforms to EN European standards and is intended for embedded devices used in a broad range of applications.

Yokogawa's global network of 25 manufacturing facilities and 80 companies spans 54 countries. Since its founding in 1915, the US$3 billion company has been engaged in cutting-edge research and innovation, securing more than 7,200 patents and registrations, including the world's first digital sensors for flow and pressure measurement. Industrial automation and control, test and measurement, information systems and industry support are the core businesses of Yokogawa. For more information about Yokogawa, please visit the website www.yokogawa.com