Yokogawa Electric Corporation announces the signing of an agreement with the Public Joint Stock Company Gazprom Neft to establish an International Center for Innovation. The agreement was signed today at a meeting of the Japan Association for Trade with Russia and NIS and the Japan Business Federation (Keidanren).

Yokogawa and Gazprom Neft have long worked closely with each other. In 2008, two companies signed a strategic partnership agreement with Gazprom Neft. Under this agreement, Yokogawa has supplied its control systems to Gazprom Neft on a priority basis and has strengthened its customer services by establishing technical centers.

Through the provision of the latest plant control technologies and the training of technical personnel, Yokogawa will continue to expand its industrial automation business in Russia and contribute to this nation's growth.

Gazprom Neft is a subsidiary of Public Joint Stock Company Gazprom, a global energy company. Gazprom Neft is a vertically integrated oil company primarily engaged in oil and gas exploration and production, refining, and sale of petroleum products. Alexander Dyukov is chairman of Gazprom Neft's Management Board and the company's chief executive officer. The head office is located in Saint Petersburg.

Yokogawa has had a foothold in the Russian market since 1993, when it opened a representative office in Moscow. In 1997, our subsidiary was founded there to launch this business on a full scale. The company changed its name to Yokogawa Electric CIS Ltd. in 2005 and has been aggressively expanding business not only in Russia but also in other CIS nations. Yokogawa has been expanding its Russian business through strategic agreements with Russian major oil and gas companies such as Gazprom Neft. 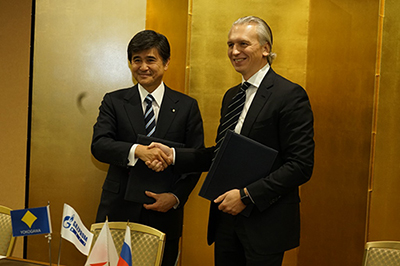 Mr. Nishijima(left) with Mr. Dyukov after signing the agreement

Yokogawa's global network of 92 companies spans 59 countries. Founded in 1915, the US$3.7 billion company engages in cutting-edge research and innovation. Yokogawa is active in the industrial automation and control (IA), test and measurement, and aviation and other businesses segments. The IA segment plays a vital role in a wide range of industries including oil, chemicals, natural gas, power, iron and steel, pulp and paper, pharmaceuticals, and food. For more information about Yokogawa, please visit www.yokogawa.com.