Yokogawa Electric Corporation announces that it will release an enhanced version of the STARDOM™ network-based control system in the spring of 2016 that includes a newly developed high-speed CPU module for the FCN autonomous controller. Based on the concept of putting forward a product that is Faster, Stronger, Smarter, STARDOM will feature the new CPU module, improved environmental resistance, and an enhanced engineering tool. With this product, Yokogawa intends to expand the open network control system business.

The STARDOM system will be exhibited at the Measurement and Control Show 2015 Tokyo, which will be held December 2 - 4 at the Tokyo Big Sight exhibition center. 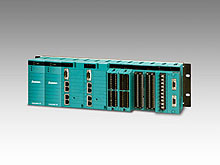 STARDOM is a network-based production control system that consists of the FCN autonomous controller and the VDS or FAST/TOOLS SCADA software. Since introducing this system in 2001, Yokogawa has continued to enhance it by adding new functions to satisfy customers' needs. Combining the reliability of a distributed control system (DCS) with the versatility and economy of a programmable logic controller (PLC), STARDOM is widely used in medium-size manufacturing plants and in geographically distributed applications such as natural oil and gas wells. To date, more than 20,000 STARDOM systems have been delivered.

STARDOM's FCN autonomous controller will be capable of reliably controlling high-speed equipment such as compressors, large wind power generators, and other types of turbines, and will be able to operate in a wider range of climatic conditions. Moreover, it will include a function that aids engineers in the performance of installation, modification, and maintenance tasks.

STARDOM is an open network control system consisting of components for control, operation, and monitoring functionality, and its ideal combination of the reliability of a DCS and the versatility and economy of a PLC is highly acclaimed. The FCN autonomous controller, the core of STARDOM, is robust and can be easily implemented in a dual redundant configuration. The controller is widely used as an intelligent remote terminal unit (RTU) not only in applications that require high reliability and versatility/economy, such as small- to medium-size plants, but also in oil and gas well (upstream) and pipeline applications. The combination of the FCN autonomous controller and VDS SCADA software with a web-based HMI that can be accessed anywhere there is a network connection increases the flexibility of STARDOM in distributed applications.