Yokogawa Electric Corporation (TOKYO:6841) announces that it has developed Virtual-M3, a simulation software tool for the Yokogawa FA-M3V range-free multi-controller, and is releasing it on this date. With this simulation software, a virtual debugging environment can be established on a PC to debug application control programs for the FA-M3V without having to use an actual multi-controller and I/O devices.

Yokogawa's FA-M3V range-free multi-controller is a high-performance programmable controller (PLC) that can be mounted on the various types of equipment used to assemble electronic products and components and in the equipment used to produce semiconductor devices.

Manufacturers of production equipment have been striving to develop products with functions that will allow their end users to increase efficiency on production lines. As ever more sensors and other types of devices are mounted on this equipment, the more sophisticated a PLC control program must become. Normally, the debugging of such control programs requires the use of a PLC, target devices, and a PC, and is a very time consuming process. Equipment manufacturers want to improve the efficiency of this debugging process so that they can bring products to market more quickly. In response, Yokogawa has developed a simulation software tool that can establish a virtual debugging environment on a PC and perform the same sort of simulations that in the past have required the use of the actual hardware. 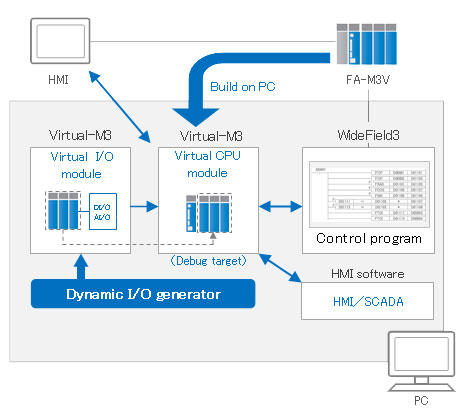 The names of organizations and products referenced herein are either trademarks or registered trademarks of their respective holders.