For years, many types of high-density culture methods, such as spheroids, fiber scaffolds, and extracellular matrixes, have been proposed for in vitro cell-based assays. These culture systems have been recognized to more accurately simulate a cells natural environment than standard monolayer cultures on a flat substrate. Therefore, cells in high-density culture conditions are expected to exhibit responses against chemical treatments that closely resemble responses of tissues in vivo.

General homogeneous assay protocols originally developed for monolayer culture can be applicable to these high-density culture systems with minor modifications.
However, for microscopy and other image-based assays, there are significant obstacles to overcome when applying conventional image analysis protocols to high-density cultures. The optical architectures of most microscope-coupled research instruments do not capture light based information throughout the entire thickness cell aggregates due to depth-of-field limitations. In addition, image-analysis software optimized for monolayer cell culture are not able to perform cell-by-cell object recognition and resulting quantification.

Here we show a set of examples with an ultra-high density HepG2 (hepatocellular carcinoma) cell culture to explain how the CQ1 can capture clear images from entire thickness of a cell layer three-dimensionally. Additionally, we will show how the CQ1 can analyze cell responses against chemical treatment, on a cell-by-cell basis.
The protocol on this note has a potential applications for analyses of various high-density cultures, including three dimensional cell culture conditions. 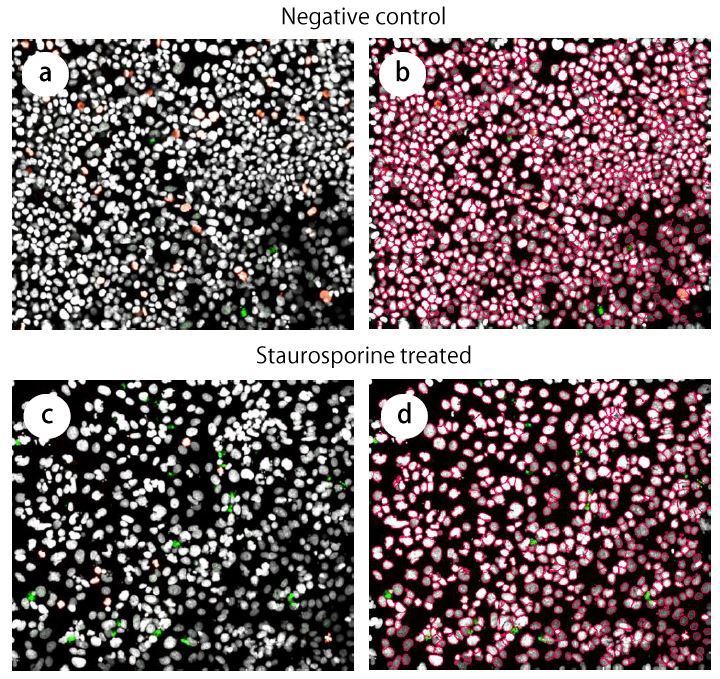 •A 96-well glass bottom microplate was coated with an extra cellular matrix, Matrigel (5 fold dilution with culture medium).
•HepG2 (hepatocellular carcinoma) cells were seeded on the pre-coated plate at a density of 5X104 cells/well. The plate was incubated for 48 hours  to create an over-confluent state.
•Staurosporine was added to experimental wells and the plate was incubated for and additional 48 hours.
•Cells were fixed with a formaldehyde solution then tagged with anti-active caspase-3 and anti-H3Ser10P. Bound primary antibodies were visualized with fluorescently labelled secondary antibodies. Cell nuclei were stained with Draq7 in the presence of RNaseA.
•Cell images were captured and the images analyzed by the CQ1. Graphing and statistical processing was carried out using FCS Express™ 5 Image Cytometry (De Novo Software, Glendale, CA) (optional).

An ultra high-density HepG2 cell culture was created and cell-by-cell analysis was carried out by the CQ1 to evaluate cell responses against staurosporine, a hepatotoxic chemical.
•To facilitate dense cell layer formation, the plate was coated with an extracellular matrix. In preliminary tests, compared with culture on a non-coated normal plastic-bottom plate, HepG2 cells plated on the matrix-coated substrate exhibited approximately ten-fold  higher sensitivity toward staurosporine toxicity (data not shown).
•Images of fluorescently labelled cells were captured in three-dimensions from the thick cell layer formation (Fig 2). Two molecular markers, H3Ser10P (cell growth) and active caspase-3 (apoptosis) were selected for immunofluorescent labelling.
•Segmentation of individual cell nuclei enabled cell-by-cell characterization in response to sturosporine (Fig 3).
•The CQ1 is a versatile system that allows simultaneous analysis of multiple markers and parameters at the single cell level in high density cell culture based assays, including thick cultures of hepatocytes.

Figure 2. 3D reconstitution of HepG2 cell images.
Twenty-one slices (along the Z-axis) of a multicolor image encompassing 50  µm of thickness were reconstructed to create a 3D image. Non-treated (a) or staurosporine treated (b) cells were fluorescently immunostained with anti-H3Ser10P (magenta) and anti-active caspase-3 (green). Cell nuclei were stained with Draq7 (gray). Objective lens: 20X.

Figure 3.  Multi-parametric analysis of two cell markers
Image analysis data from the CQ1 of non-treated (a) or staurosporine treated (b) cells was exported and further analyzed by scatter plots in FCS Express™ 5 Image Cytometry. The proportions of the growing or dead cell populations were evaluated quantitatively. On each scatter plot, 1X104 events were plotted.