Cell cycle analysis in relation to H3Ser10P immunofluorescence by utilizing the CQ1ʼ s multi-color channel capabilities. Histone molecules are phosphorylated during cell cycle progression with phosphorylation of the 10th serine of histone H3 being one of the well characterized events of late-G2 to M progression.

The CQ1 conducted the 3D imaging and 3D analysis for the nuclei of canceration stem cells dyed with Draq5. The measurement data from the number of cells and size can lead to the analysis of differentiation status. 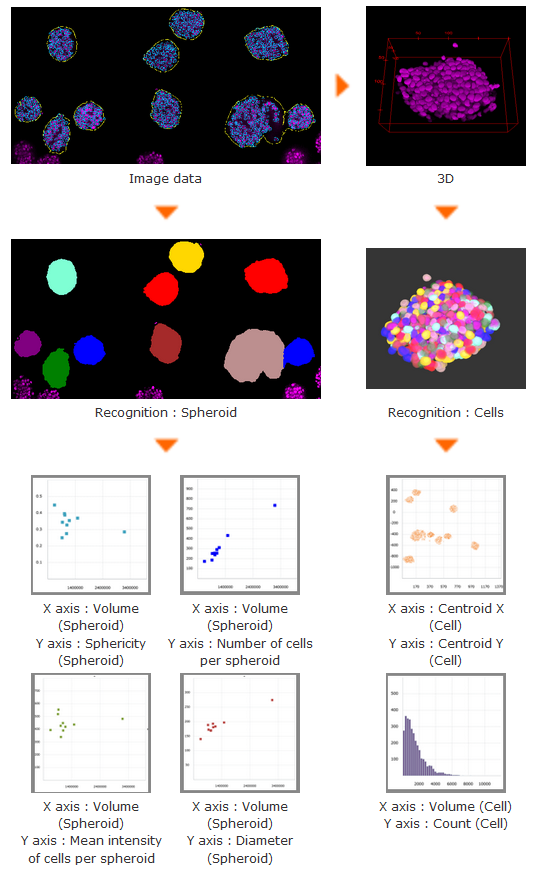 CTCs are tumor cells which circulate in peripheral blood. Developed tumors metastasize through the bloodstream and lymph fluid. Therefore, tumor cells exist in the bloodstream when metastasis occurs. The detection of CTCs makes it possible to diagnose recurrence and metastasis at an early tumor stage. CTCsʼ numbers are very small as only less than 100 CTCs are contained in more than 1x106 of blood cells in 10 ml of cancer patientʼs blood. Therefore it is difficult to detect CTCs with a flow cytometer because they detect CTCs as noise. However, it is very easy to detect rare CTCs with an Image cytometer.

The phosphorylation of histone H2AX Ser139 (gamma-H2AX) is one of the significant events upon DNA double strand break. Quantitative measurement of gamma-H2AX focus formation can be easily performed by using the high-speed confocal image acquisition in combination with the Granule Analysis Template.

GPCR(G-Protein Coupled Receptor）that exists on the cell membrane plays the role to transmit the signal from outer cell to inter cell through the G-Protein. Combining with GPCR, Ligand is absorbed from the membrane to inter cell and forms the endosome and desensitize with neurokinin-1 recepter(NK1R). (Internalization) With the counting the number of intracellular vesicle ( granule ), you can carry out the drug screening and the function analysis.

Cell Proliferation
The whole view of one well of a 96 wellplate can be captured as a single image by using a 2x objective lens. It is possible to rapidly judge cell growth in each well based on cell numbers or individual cell area.

Whole well in one shot by 2x lens