Continuous Control Solutions ("CCS") has been providing advanced turbo machinery solutions to global markets since 2000 with a steadfast focus on developing advanced control algorithms implemented in the customer's choice of PLC or DCS hardware platform. CCS Turbo Machinery Control Solutions have been implemented on a variety of hardware platforms including Allen Bradley ControlLogix, Honeywell C300, Siemens S7, ABB AC800M and Emerson DeltaV. Due to the increasing demand for compressor and turbine control systems to be implemented in a common hardware with plant DCS, CCS has partnered with Yokogawa to offer advanced, proven and tested turbo machinery controls solutions on the Yokogawa Stardom PLC.

Yokogawa's development of its high-speed protection and servo I/O modules has indicated the company's strategic initiative to offer DCS customers the ability to achieve market-leading turbo machinery control in their Yokogawa hardware rather than settling for a third-party, "black-box" solution. In 2011, Yokogawa and CCS started collaboration on an R&D project to develop CCS's world-proven turbo machinery control applications for the Stardom PLC. In the summer of 2012, CCS completed the development of Yokogawa-approved library elements for compressor and turbine control within Stardom's LogicDesigner.

Customers are becoming more sensitive to the increasing costs of maintaining, servicing and providing spare parts for black-box turbo machinery control systems. The inability of black-box providers to consistently service obsolete controllers over time increases retrofit costs and forces otherwise unnecessary service visits and hardware upgrades. Allowing turbo machinery control to migrate from the realm of black-box solutions to systems which integrate seamlessly with a plant DCS provides a one-stop-shop for servicing hardware on site. In addition, customers can work with their DCS provider to negotiate favorable spare parts contracts for turbo machinery controllers that will be included in overall DCS spare parts agreements. Finally, operator screens, trending and general HMI functionality can be incorporated seamlessly into the plant DCS system, increasing transparency of the overall system.

The air separation unit located at the Lukoil "Karpatneftekhim" plant in Kalush, Ukraine was designed and built in 1996. According to the CCS initial site survey report, the air compressor began experiencing problems starting in 2010:

These were all typical signs of unregulated compressor control resulting in multiple compressor surges over time. These findings were confirmed in the course of surge tests conducted during commissioning.

These issues were a major cause of up to 12 unscheduled plant shutdowns per year. As the existing control system was no longer capable of preventing the compressor from surging, the decision to replace the entire compressor control system was made. Further to CCS's successful implementation of the surge prevention control system on the chlorine compressor units at the same site, "Karpatneftekhim" appealed to CCS with a request to design a compressor control system for the air compressor unit. One of the requirements was to implement a Yokogawa hardware/software based solution since the plant was planning on upgrading to a Yokogawa Centum DCS in the near future. Part of the upgrade project is to maintain critical operating systems in a common hardware platform. The compressor (C1161) is a DEMAG multi-stage centrifugal compressor, model VK 32-3, driven by 4MW electric motor. Compressor was delivered in 1996 and designed to compress the process air up to ~ 6 atm g. After compression the air is directed to drying absorbers. Compressor VK 32-3 is a multi-shaft, three-stage compressor, with intercoolers after first and second stages. To maintain a wide range of operation, the compressor is equipped with pneumatic internal guide vanes (IGV). Flow and/or pressure of air supplied to the drying unit is used as the primary process variable. To protect compressor from surge a pneumatic antisurge valve (ASV) is used to vent the air to atmosphere at compressor's discharge.

The CCS Control System provides a significant increase in efficiency, reliability and stable operation of air compressor C1161 in the following operation modes:

The main objective of surge control is to maintain the minimum flow rate through the compressor determined at the surge line with the addition of the required safety margins. The CCS control system provides anti-surge control and protection by venting the minimum required amount of air to atmosphere through the antisurge valve. The control system automatically maintains the main process variable by either manipulating the inlet guide vane installed in the compressor's inlet or, if necessary, controlling the compressor anti-surge valve.

The CCS Control Solution was implemented on the Yokogawa Stardom hardware/software platform. To conform with project requirements a controller with CPU NFCP100 (in redundant configuration) was selected. This CPU is capable of providing high performance for various applications with minimum execution time of 40ms, in-line with market anti- surge requirements, competitive offerings and the needs of the plant.

Based on results from start-up and commissioning of the control system, the PLC has demonstrated high levels of performance. The logic program along with CCS control applications run within CPU control environment in tasks with 40ms, 250ms and 500ms execution cycles. I/O processing, one Process Controller (PC) and three Surge Prevention Controllers (SPC), one per each stage, were assigned to the 40ms tasks. 250ms is configured for tasks which perform logic control functions such as sequencing for loading and unloading of the compressor, various trips, etc. 500ms has been assigned to task, which is responsible for the Modbus communication of the compressor control system with existing DCS. CPU load during operation at full capacity did not exceed 37% (Figure 3). This SCADA system offers a high degree of integration with the family of Yokogawa controllers, allowing less time for HMI development.

Surge tests of the compressor C1161 were conducted during start-up and commissioning (Figure 7). A total of six tests for various angular positions of the inlet guide vanes were performed and precise surge line for each individual stage has been determined as a result. CCS' patented Surge Prevention Control (SPC) method defines the compressor surge line over a wide range of changing conditions and allows setting of the compressor surge prevention control line for optimum surge protection without unnecessary recycling or blow-off. This method allows for accurate calculation of proximity to surge even when the flow measurement fails or is not available.

Surge Prevention Controller application is developed as an independent function block in the Logic Designer environment and used as custom plug-in to the project library. The function block offers a full set of features available in CCS's standard Surge Prevention Controller implemented on any other hardware and software platforms, including patented algorithms for anti-surge protection.

SPC function block has a set of input and output parameters, which interface the application's internal variables with real I/O from a separate I/O processing block, allowing maximum "embedding" capabilities. Management of the controller from external logic is performed by manipulating boolean variables of corresponding command inputs of the function block. Refer to Figure 8 for sample calling procedure of SPC function block.

To perform functions by operators a standard SPC faceplate is offered (Figure 9).

Additionally, when controller is switched to Surge Test, a separate popup window allows using the embedded functionality that is intended to help qualified engineering personnel during surge tests of the compressor (Figure 10).

The Compressor Map and Faceplate are parts of operator interface implemented in Fast/Tools 9.05 SCADA system and can be invoked by clicking on dynamic elements on the display (buttons, etc.).

PC function block has a set of input and output parameters, which interfaces application's internal variables with real I/O from separate I/O processing block allowing maximum "embedding" capabilities. Management of the controller from external logic is performed by manipulating boolean variables of corresponding command inputs of the function block.

To perform functions by operators a standard PC faceplate is offered (Figure 12).

The panel allows operators to monitor status and current mode of operation of the controller as well as to change various modes of operation by commands available for selection via corresponding menu.

Over the period of operation the compressor control system has proven its effectiveness as the controlling compressor became "transparent." Plant personnel have obtained the ability to clearly monitor the nature of the physical processes that take place in the compressor; for example, when the compressor operating point approaches or is near to the surge line. This gives operators the ability to perform actions directed to prevent unnecessary opening of anti-surge valve due to process conditions. Upon reaching critical conditions the old system simple opened the anti-surge valve to 100%, resulting in a complete compressor discharge, followed frequently by an emergency plant shutdown. The new CCS control system avoids such situations as it opens anti-surge valve the minimum amount necessary to ensure that a minimum flow of air through the compressor is maintained to prevent surge.

Accuracy of the regulation of the main process variable (discharge pressure of the compressor) is approximately 0.01bar, which exceeds performance of the old system. This allows the process to gain more stable conditions.

As it turned out during project execution, the problems (multiple surges) described at the beginning of the document arose from clogging of compressor's intercoolers, which the operation personnel was unable to recognize in advance. During modernization phase the pressure sensors were installed at the suction and discharge of each compressor stage. Thus, the operation personnel is able to recognize in advance the degree of clogging of the intercoolers by monitoring the differential pressure on them, as corresponding alarms and interlocks are available in the system, and perform necessary preventive actions to maintain the equipment in good operating condition.

The CCS compressor control system installed at the Lukoil "Karpatneftekhim" plant in Kalush, Ukraine marks the first- ever Yokogawa Stardom-based compressor control system implemented as part of the growing Yokogawa/CCS relationship. It marks a very important point in the development of the turbo machinery controls market, demonstrating to customers that what was previously designated solely for black-box providers of proprietary control systems is now possible to execute in the customer's choice of hardware, adding flexibility to installing new or upgrading old automation systems.

The contents of this publication are presented for informational purposes only, and while every effort has been made to ensure their accuracy, they are not to be construed warrantees or guarantees, express or implied, regarding the products or services described herein or their use or applicability. All sales are governed by our terms and conditions, which are available on request. We reserve the right to modify or improve the design or specification of such products at any time without notice. 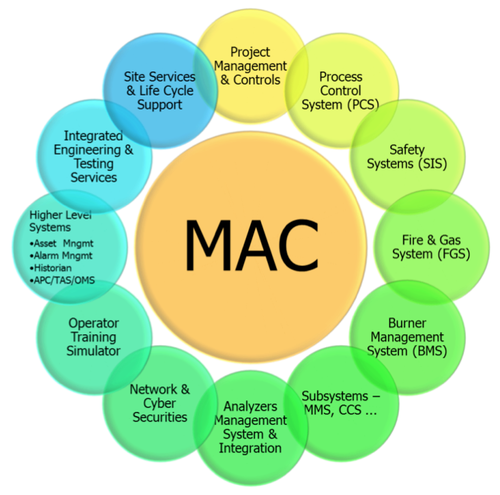