While pipeline automation solutions may account for but a tiny fraction of the total value of a pipeline construction project, they obviously can have a major impact on the amount of revenue that a pipeline can generate. To this end, an automation supplier should be able to provide:

It is worth looking very closely at all of these issues, especially in areas that are covered by safety legislation as well as rapidly changing automation technologies.

SembCorp Industries and Indonesia have signed a $4-billion, 22 year sales agreement that will secure the daily supply of 325 million standard cubic feet of gas to Singapore until the year 2023. The gas will be transported via a 640-km submarine pipeline from Indonesia's West Natuna gas fi eld to Singapore's Jurong Island. Current users of the gas are Tuas Power, SembCorp Cogen Power, Seraya, Exxon Mobil, and Elba. The last part of the pipeline, the onshore receiving and distribution section, was engineered by Sembawang Engineering. Yokogawa Engineering Asia was the main instrument vendor for this project, delivering the total control system, including SCADA / PLCs, the FAST/TOOLS SCADA package, emergency shutdown (ESD), leak detection, billing, nomination and allocation, internet protocol (IP) telephony, video communications and network infrastructure. Design, engineering, integration, and installation were also carried out by Yokogawa.

The main driver in the system specifications was the need for highly integrated and advanced functionality and reliability. The system had to be capable of performing the fiscal monitoring and control needed to manage the gas supply contracts between the supplier and end-users, and this required the use of a specialized nomination, allocation and billing package. In addition, the system had to be capable of handling significant expansion to allow for more end-users and gas suppliers, both through existing and new pipelines. Safety and reliability were also major concerns, hence the inclusion of a specialized leak detection package as well as a dedicated and certifi ed ESD system.

The entire system had to be tightly integrated to allow reliable operations with a minimum number of operational staff, which was essential to optimize the operating costs of the pipeline. This requirement mandated the use of a number of leading edge technologies, including object linking and embedding for process control, virtual private networks with fiber optic links, redundant Ethernet, IP telephony and video web technology. Redundant fiber-optic cables were set up in a ring configuration and, as a backup in case of total fiber optic failure, leased telephone lines were connected to the control PLCs at the end-user locations.

The result was an integrated pipeline automation system using Ethernet TCP/IP as the communications network and having sufficient bandwidth for control information, the IP telephone system and the CCTV web server.

Yokogawa's complete system was operational six months ahead of schedule and the official opening was on January 15, 2002. 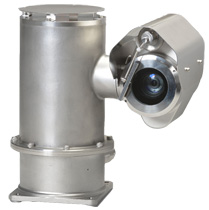