Yokogawa Electric Corporation announces the release today of an enhanced version of the WideField3 programming tool for the FA-M3V range-free multi-controller.

The FA-M3V is a high-performance controller that is embedded in electronic component/equipment assembly systems and semiconductor manufacturing equipment, and the WideField3 programming tool is used to create, debug, and manage programs that run on this controller.

Debugging and analysis of PLC programs can be time-consuming processes. Until now, equipment developers usually have had to check their PLC's programs by using a sampling trace function or, if they required a real-time logic analysis capability, by creating and running their own debugging programs.

In response to its customers' needs for real-time debugging and analysis capabilities, Yokogawa has developed this enhanced version of the WideField3 software.

Live Logic Analyzer
With the inclusion of Live Logic Analyzer, which is a near real-time logic analysis function, the upgraded WideField3 programming tool now has the capability to display data that shows the status of a PLC program as it runs on a sequence CPU module*. This improves work efficiency by enabling engineers to monitor a program's execution status while they collect the program execution data. At any one time, the tool can display control data for up to 96 points. This data can be displayed graphically in a single window, enabling even maintenance personnel who are not familiar with PLC ladder programs to easily pinpoint problem causes. This improves the efficiency of debugging and problem analysis.

* Live Logic Analyzer supports the use of the F3SP71-4S and F3SP76-7S sequence CPU modules. 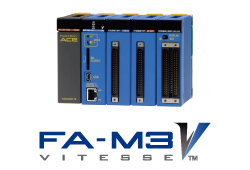