The CV8000 features a cell incubator with an improved airtight design that facilitates the observation of cell behavior over long periods of time. In addition, the CV8000 comes with CellPathfinder, a new program that can analyze images of unlabeled cells and 3D images of samples. With these features, the CV8000 improves the efficiency of drug discovery research and biomedical research on leading-edge subjects such as iPS and ES cells.

Yokogawa will be displaying the CV8000 at the SLAS Europe High-Content Screening Conference 2017, which is to be held September 19 - 20 in Madrid, Spain. The organizer of this event, the Society for Laboratory Automation and Screening (SLAS), is world-renowned in the life science field. 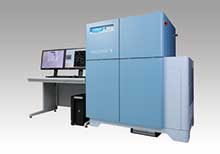 High content analysis (HCA) systems that can identify new drug candidates by screening up to a million separate compounds are entering wide use in the drug discovery field. With HCA, cells are treated with candidate compounds, the cells are imaged by a microscope camera, and the images are analyzed to determine how the cells reacted to the compounds. HCA systems are in high demand because they can carry out the test sequence automatically. By thus speeding up the screening process, they are able to quickly analyze large numbers of candidate compounds.

To determine the efficacy of candidate compounds and the mechanism of their effects, cells must also be observed over a long period of time. Accordingly, researchers who use HCA systems need for them to provide an environment that enables cells to be incubated and observed for long periods.

Organelles such as nuclei and mitochondria are often labeled with fluorescent dyes to make them easier to observe under a microscope, but this sometimes has a harmful effect on the cells. To enable the observation of living cells, there is an increasing need for alternatives to the fluorescent labeling technique. Elimination of the time-consuming labeling process also would considerably improve throughput. However, it is difficult to automatically analyze images of unlabeled cells because of their low image contrast. The CV8000 was developed to address such needs.

A high throughput screening (HTS) system performs high-speed screening of candidate compounds for new drugs. There are several methods for screening. High content analysis (HCA) is a high-precision, objective screening method that uses multiple parameters to analyze microscope images of the target cell and thus determine temporal changes within the cell, and an HCA system utilizes this screening method. Yokogawa's CellVoyager is an HCA system with screening throughput similar to that of an HTS system. For the observation of multiple samples at high speeds, it utilizes a confocal scanner unit that is capable of observing live cells in real time and a drive mechanism that uses a high-precision positioning technology. (This technology was originally developed for the manufacturing of semiconductors, LCD panels, and the like.) Yokogawa released the first generation CellVoyager CV6000 in 2009 and the CellVoyager CV7000 in 2011. With its industry-leading screening speed*4 and resolution*4 and its capability to continuously acquire images for the observation of changes in cells before and after treatment with compounds, CellVoyager has been helping to speed up the discovery of new drugs and improve efficiency in biomedical research.

*4 Based on a September 2017 Yokogawa market survey

The names of corporations, organizations, and products herein are either trademarks or registered trademarks of their respective holders.